The Steelers traded wide receiver Chase Claypool to the Bears, according to a member of the Pittsburgh team who was granted anonymity because the deal is not yet official. Here’s what you need to know:

Claypool, Pittsburgh’s second-round pick in 2020, has tallied just 32 catches for 311 yards and one touchdown this season. He started all eight games for Pittsburgh before the trade.

In addition to his career-low target rate, his average depth of target (9.46 yards downfield) is also a career low.

His best season in Pittsburgh came as a rookie, when he caught 62 passes and scored 11 total touchdowns.

The 24-year-old is still on his rookie contract through next season.

His 32 receptions would lead the Bears (3-5), whose leading receiver, Darnell Mooney, has 25 catches for 364 yards.

How Claypool will fit into the Bears’ offense

Claypool will fit in as one of the Bears’ best threats for quarterback Justin Fields in their passing game. His arrival takes some pressure off  Mooney to be the Bears’ No. 1 receiver.

A combination of Mooney and Claypool changes everything. At 6-4 and 238 pounds, Claypool should fill the needed go-up-and-get-it role in the offense. Fields needs that type of help. Claypool’s presence also will allow offensive coordinator Luke Getsy to use Mooney’s speed in different ways, including from the slot. The Bears have the worst passing offense in the league. That won’t change overnight. But adding Claypool undoubtedly helps. – Jahns 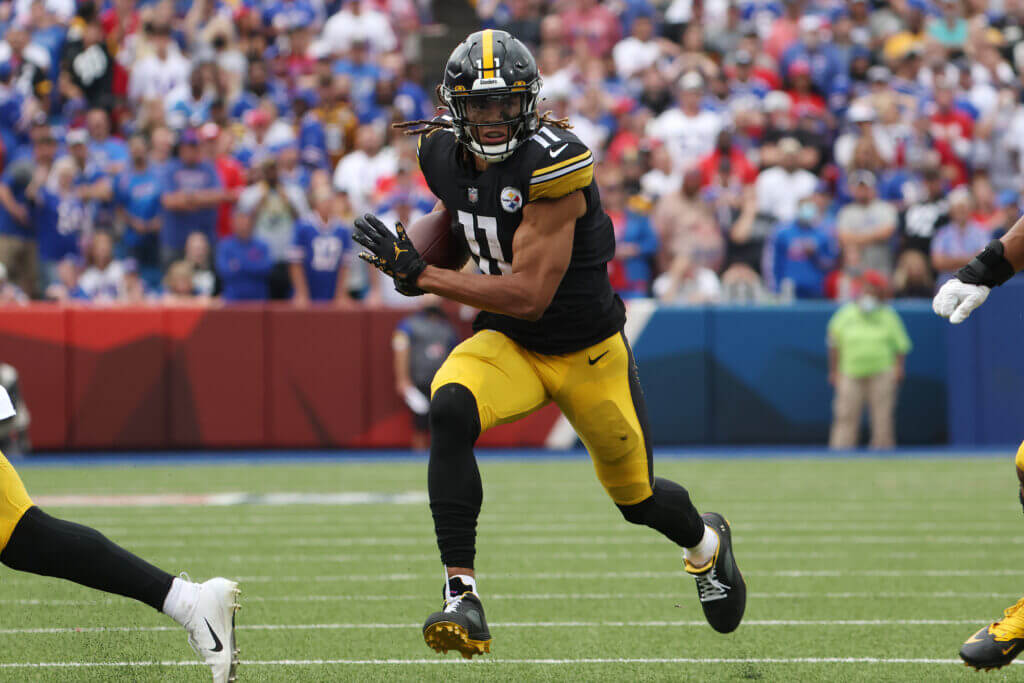 Bears trade for Chase Claypool: Why now, and what this means for Justin Fields

Why Chicago sought out a new receiver

This trade is more about 2023 and beyond than the 2022 season. The Bears need to load up on receivers for Fields, and general manager Ryan Poles watched the best possible options for 2023 all get new deals this past summer — A.J. Brown, Terry McLaurin, DK Metcalf and Deebo Samuel.

It’s an aggressive — and expensive, both now via draft capital and in the future with an extension — move to get a young receiver with upside to join Mooney, and Claypool is better than anyone in the 2023 free-agent class. The Bears are probably banking, too, on knowing what they can get from him as opposed to the unknowns that come in the draft. – Fishbain

Why the Steelers were willing to make the trade

After the Steelers selected Claypool in the second round of the 2020 NFL Draft, he almost immediately made his presence felt. In just his fourth NFL game (and first NFL start), he snagged three touchdown passes in a 110-yard outburst against the Philadelphia Eagles. He added a rushing touchdown to cap the four-touchdown afternoon. That set the stage for a promising rookie season during which Claypool hauled in 62 passes for 873 yards and nine touchdowns.

However, in the time since, Claypool has been unable to build upon that first season. Even though his production was similar last year in terms of catches (59) and yards (860), he tallied just two touchdowns. Beyond the box score, Claypool drew the ire of fans because he didn’t consistently use his freakish measurables to high-point the football or battle for contested catches. – DeFabo

What the move means for Pittsburgh

In the short term, the move likely means more playing time for receivers Steven Sims, Gunner Olszewski or Miles Boykin. Looking ahead to next season, rookie Calvin Austin could eventually become Claypool’s replacement in the slot. He showed promise in the preseason before a foot injury derailed the fourth-round pick’s rookie campaign, forcing the club to place him on season-ending injured reserve.

The Steelers do have depth at the receiver position, after handing Diontae Johnson a new two-year extension in the preseason and selected rookie George Pickens in the second round. Sitting at 2-6, they can use this second-round selection to address one of their many needs, including on the offensive line. – DeFabo

What this means for your fantasy lineup

With Claypool in Chicago, his own value doesn’t change much — going from being the No. 3 in an offense passing more to the No. 2 alongside Mooney. However, Fields gets a boost, as he continues to turn into a weekly QB1. Fields still has a bit of risk, but another reliable receiver has been needed.

As for the Steelers, the worries over Johnson and last week’s dud for Pickens are erased. Claypool out of the picture helps Kenny Pickett’s targets funnel to the duo without a high-impact third. Johnson’s target volume has been high, which will remain, and we can hope for a receiving percentage improvement, but the big winner could be Pickens, who flirted with some WR2 value but can now hit that WR2/3 range each week. – Ciely